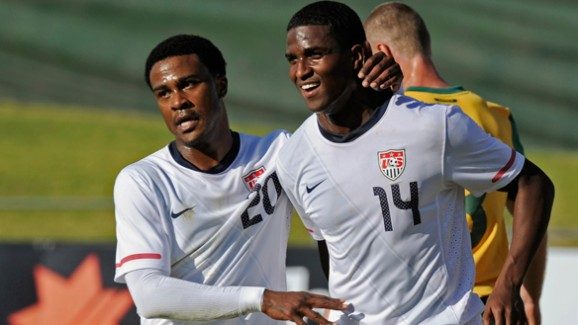 A month ago, Jozy Altidore was a shoe-in starter at forward for the United States. Now, post a minor ankle injury and a measly one goal season for his Premiership team, I’ve changed my mind. After beating Australia 3-1 today, the Buddle-Findley combo at forward is who I think coach Bradly should start, for the following reasons:

But it wasn’t just Buddle and Findley providing the winning offense. Herculez Gomez is an early second half sub in my mind, for almost any World Cup game. And our midfielders, including Donovan, Dempsey, and Bradley, played great today.

Our defense? As I wrote earlier this week, I get nervous every time I see them play. Commentator Martin Tyler put it best when he said, “With the ball, the United States create numerous possibilities. Without the ball, not so much.”

Still, today’s win got me excited for our prospects. But it will take some hard cuts, including benching Altidore, Gooch, and Demerit against England. They’re just not in form. And we should sit them longer to not only give them additional recovery time, but to create added drive.

For England, here’s who I’d like to see start: