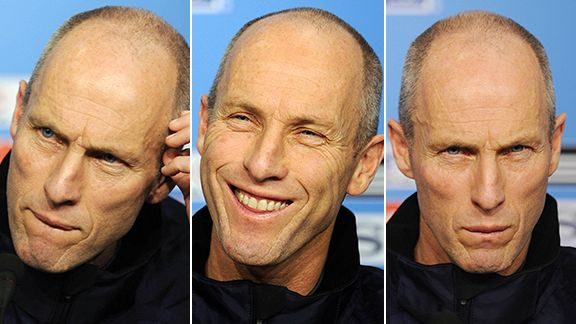 Misunderstood. Quiet. Second choice. Thoughtful. Persistent. These are all words that describe our head coach. And after reading this intimate profile of him on ESPN, I like him more today than I ever have.

No matter what you think about Bradley, it doesn’t matter. Whether he’s a genius or a robot, whether his heady approach will help or hurt the psyche of the U.S. team is, at this point, irrelevant.

Fifty-two years of preparation for the biggest moment in Bradley’s life will come down to the next four weeks. One Oguchi Onyewu slip on the grass, one missed penalty kick by Landon Donovan, one mistake that leads to a 35-foot Algerian laser past Tim Howard and all that Ivy League-driven planning and team-building won’t mean a thing. If the U.S. doesn’t advance out of its group, Bradley will have failed.

Don’t feel bad. He knows this. That’s why his fingerprint is on every single thing his team will touch in South Africa.

Let’s see if he can add “winner” to that list of adjectives, at least as it pertains to the World Cup.