Algeria “not an easy win” for U.S. at World Cup — USA Soccer Stud 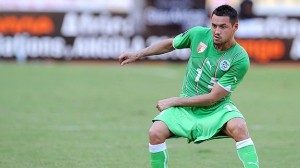 Algeria is ranked 31st in the world, according to FIFA. So it’ll be cake for the U.S. to beat them in the opening round of the World Cup, right?

Not exactly, writes ESPN’s Leander Schaerlaeckens, who says Algeria is tough. “Based on its play in the Africa Cup, the notion that Algeria on good days (which, admittedly, haven’t been regular) is at least as strong as the U.S. is not far-fetched. Like the U.S., Algeria is a scrappy, physically strong team that prefers to sit back and punish opponents on breakaway attacks. It does so with more flair than the U.S. does.”

Let the record show that no World Cup game is an easy win. In any case, we got this one. Count on it.