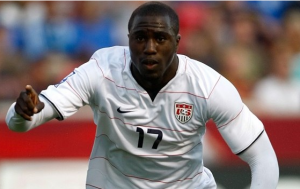 UPDATE: FIFA has removed the below linked-to article, after Jozy Altidore said it contained statements he “never said.” Not sure what happened.

Original story: U.S. forward Jozy Altidore thinks like a lot of American soccer fans. Yes, England is a great team. But we took an entire country from them, and we’ve beat them before at the World Cup. So there’s really nothing to fear about our opener against them.

“England don’t scare us,” Altidore told FIFA. “On the contrary, we’re really looking forward to that match. I think that we’re capable of beating anybody on our day and there’s no team in the world that can beat us easily. We already proved what we’re capable of at the Confederations Cup, so why not at the World Cup? It’s not impossible.”

For the record, Wayne Rooney scares me, but I like Jozy’s style.