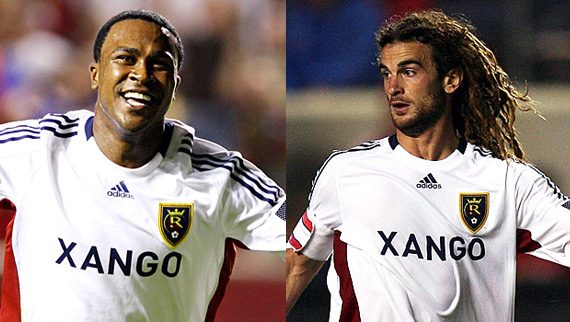 SANDY, UT—In a country of more than 300 million, only 23 will get to play for the U.S. at this summer’s World Cup.

And for two of those hopefuls, playing for the same domestic professional team, the odds are even worse. But that hasn’t stopped Real Salt Lake’s Kyle Beckerman and Robbie Findley from trying.

“It feels great to be a part of the whole process,” says a Beckerman. “I’ve played in more than 200 MLS games, but only 12 games for the national team, so it’s really special.”

Having made cameos for the team since 2007, Beckerman played in a crucial World Cup qualifier as a second half substitute against El Salvador last fall, a game the Americans won. Five days later, he suited up for a qualifier against Trinidad & Tobago but did not play.

Since then, Beckerman has been left out. Although admittedly head coach Bob Bradley has cycled in and rotated several other players in an effort to consider all his options, so all is not lost for the 28 year old Maryland native.

But it’s obvious he’s on the fringe. When asked how the final selection process works, Beckerman explains, “You’ll maybe get an email a couple weeks before, saying you might be picked, and then an email a week before saying your were picked.”

Kind of like how high school athletic teams are chosen, sans the bulletin board, but with the same amount of uncertainty. (See also: Edson Buddle)

When asked about his chances, Beckerman stays grounded in reality. “It might not work out for me,” he admits. “But I’m not really thinking about it. Helping my club team win games only helps my national team prospects. If it happens, great. If not, I’ll keep focusing on Real Salt Lake while helping to make MLS an elite league.”

Ironically, that’s an attitude that will help the U.S. compete in future World Cups. So whether he makes the team or not this summer, Beckerman will continue to contribute to the team, albeit in a indirect, but no less noble way.

Findley, too, is on the outside looking in. “It’s an honor just to be considered for the World Cup,” he says.

But his prospects are encouraging. As a striker with speed—something the injury ridden U.S. currently lacks—Findley has started three times already this year. He failed to impress against the powerhouse Dutch in March. Nevertheless, some soccer pundits are giving him a fighting chance of still making the team. Especially since regular speedster Charlie Davies will most likely miss the tournament due to ongoing rehabilitation of a previous injury.

But like Beckerman, Findley is in the dark regarding his position on the team. “I haven’t heard anything,” he says. “I’ll find out when they announce the camp roster (on May 11).”

What’s his short-term strategy then of increasing his stock? “It wouldn’t hurt to score some goals,” he says with a smile. “I’ve gotta a feeling [Coach Bradley] is watching a lot of MLS games right now—he has to be. So we try and stay focused out here, because that’s what’s going to propel us to the roster.”

In speaking with both Beckerman and Findley, I’m impressed by their civility. Here there are, doing everything they can to attend the world’s largest sporting event, and yet I don’t detect the slightest amount of animosity towards their contemporaries. If anything, their rooting for their teammates—even the very ones who are injured, that if fully recovered, would reduce Findley’s and Beckerman’s chances of making the team.

“We’ve got a lot of good players,” says Findley. “We got a whole bunch of guys overseas playing well, and have some guys [in MLS] trying to make a name for themselves too. So the selection process is going be tough for the coaching staff, especially since a few or our injured guys are starting to get better.”

Beckerman is just as gracious. “As a team, our biggest strength is our fight, our heart—things you can’t teach players. It’s just part of our American culture.”

Like any good World Cup fan would do, I ask each who will win it all this summer. “Since I have a possibility of making the team, I have to pick the U.S.,” Beckerman says with a grin. “Yeah, I gotta go U.S. all the way,” adds Findley.

Obviously, the lower ranked Americans aren’t the favorites. But as U.S. Soccer president Sunil Gulati says, “Why play unless you think you can win?”

Win or lose, and whether they make the team or not, both Beckerman and Findley know what the World Cup means to their sport. Particularly this World Cup, after ESPN announced in April that it would spend more on this summer’s tournament than any other sporting event in the broadcaster’s 30 year history. “We’re pulling out all the stops to make sure [Americans] pay attention to the game, because we’re convinced that when they pay attention, they’re going to fall in love with the game,” says executive vice president John Skipper.

Says Beckerman, “As players, we’re really excited about ESPN’s commitment to the sport, which will only help it grow.”

Regardless if he makes the team, Findley is just as caught up in the moment as everyday fans. “People talk about the World Cup wherever you go, including MLS players,” he says. “It’s gonna be a great competition.”