Are we getting worse? Despite win over South Africa, U.S. soccer finish year at .500 — USA Soccer Stud 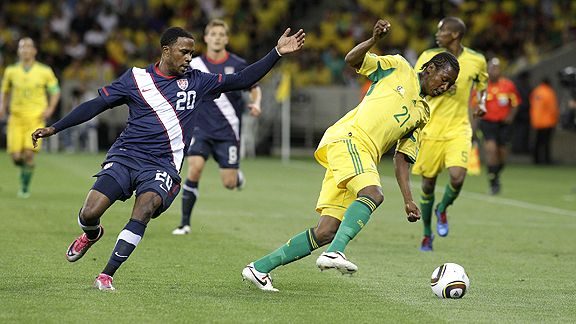 Say what you will about the U.S. soccer team, but they played worse this year than they did last year—never mind the last minute 1-0 win over South Africa today.

This year, the national team underachieved at 5-5-4 to finish with a .500 winning percentage. Last year, the team managed a respectable 13-8-3 to finish over .600—about where they typically are on the world stage. I realize the competition was stiffer this year, but not by much. Not enough to justify the .100+ drop in productivity.

As a testament to this year’s slide, today’s game was rife with stale coaching, porous defense, and overall insipid attacking. The U.S. team managed to play with heart a couple of times this year, most notably during World Cup games against Algeria and Slovakia. But it’s obvious the team played with no pride or purpose whatsoever during the second half of the year.

In other words, we’re still young. We can’t buy a good coach. We have few prospects. And we play like the world expects us to: not very good.