As if our defense could get any worse: Onyewu out 6 months — USA Soccer Stud 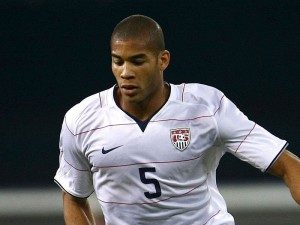 According to the Associated Press:

American defender Oguchi Onyewu will be sidelined for six months following surgery to repair a ruptured patellar tendon in his left knee. That gives Onyewu little time to regain his form ahead of the World Cup, which opens June 11 in South Africa.

To be clear, that’s about six weeks of preparation. That’s enough, no?