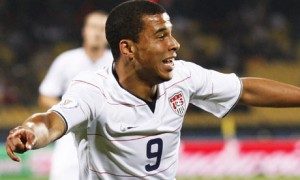 Speedy U.S. forward Charlie Davies was largely ruled out of the World Cup last October, after a fatal car accident. Unlike his unfortunate passenger, Davies survived, but he sustained a broken right femur and tibia, a broken left elbow, facial fractures and a lacerated bladder in the process. The initial prognosis was 6-12 months of recovery—if at all.

What a difference a new year makes. “Less than four months after the crash that threatened to end his promising career, Davies is already jogging at a good rate and working on agility drills that would have seemed impossible just weeks earlier, when simply getting out of a wheelchair was an exhausting exercise,” writes ESPN’s Ives Galarcep, after interviewing Davies.

Awesome news. Still, it’s unclear how effective Davies might be on the pitch, even if a timely recovery is made possible. “The playing field will provide the real measure of just how realistic a full recovery in time for the World Cup will be,” concludes Galarcep. Here’s hoping Davies makes it a reality.