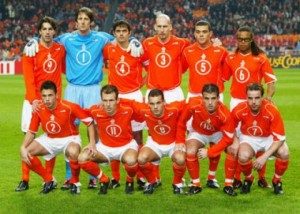 Update: U.S. Soccer has confirmed the match. The game against the third ranked Dutch team will air on ESPN2/Galavision at 2:30pm Eastern.

Original story: In an effort to ready itself for the 2010 World Cup in South Africa, the men’s national team will play Holland/Netherlands/”whatever they go by these days” next year, says the L.A. Times.

“Although U.S. Soccer has not announced or confirmed it, Coach Bob Bradley’s team is likely to play a friendly match against the Netherlands in March, most likely March 3 in the Dutch city of Eindhoven,” the paper reports.

The United States is 0-3 against Holland. (Gulp.) But you’d be hard pressed to find a better team to play before the World Cup.