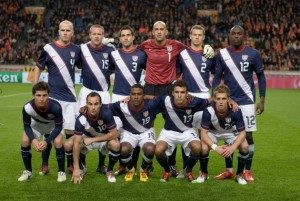 It was a hard-fought fight, but U.S. forward Charlie Davies failed to make the World Cup camp roster, announced today by U.S. coach Bob Bradley. Although a shoe-in starter previously, Davies was unable to recovery in time from his near-fatal car accident last October.

In an effort to replace the speedy Davies, coach Bradley went with Edson Buddle, Herculez Gomez, Robbie Findley, Brian Ching, and Eddie Johnson alongside expected starting forward Jozy Altidore. Buddle and Gomez come out of no where to secure their spots, after scoring a boat load of goals early this season for their respective club teams. In fact, neither was even listed in the U.S. team’s 2010 media guide at the start of the year.

In terms of midfielders and defenders, there were few if any surprises. Over the next two weeks, the 30-man roster will be reduced behind closed doors at the World Cup training camp in Princeton. Coach Bradly will then submit his final 23 man roster to FIFA by June 1, a day after the team departs for the tournament.

The full roster is as follows: