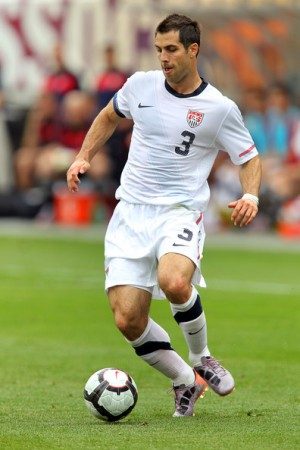 If you hear a passing remark at the World Cup this summer from someone saying the U.S. has no offense, smack ‘em on the head for me. Then point ‘em to this proven analysis, in which a really smart dude ranks the U.S. as a top 10 scoring team in the world (9th to be exact). Believe it.

No, our team’s real worry is our defense. Our back line. Our onion bag stoppers. Even if everyone is healthy (I’m looking at you “Gooch” and DeMerit), our defense is still the weakest link. In fact, the only player I expect to start on defense is team captain Carlos Bocanegra.

When in form and recovered from injury, Oguchi Onyewu is a no brainer alongside Boca. But Gooch still seems rusty. And it could take a few more weeks before he’s match fit. Unfortunately for the U.S. team, we don’t have a few more weeks. The tournament starts in nine days.

As for the full back opposite of Boca, I normally favor the taller Jonathon Spector over the smaller Steve Cherundolo. I think I still do, but I’ll let coach Bradley pick the starter. I wouldn’t be bothered one way or the other, really.

As for center backs, I think the young, hungry, and capable Clarence Goodson should get the start. Without out a doubt. He’s a bit of a liability, but what healthy veteran on our defense isn’t? What’s more, Goodson has more fire when compared to the alternatives. And I think he’s more of a playmaker than DeMerit.

In the case Gooch still isn’t fit to start the opener on June 12 against England, I’d be okay pairing DeMerit with Goodson in the center. But I think I’d be more excited to see Goodson paired with Boca (normally a full back) in the center, then position Cherundolo and Spector on the sides.

The one saving grace when considering our disadvantaged back line is our last straw: goalie Tim Howard. He’s probably a top 5 goalie in the world. Definitely a top 10 one. So if he plays above himself this summer, any mistakes on defense could be offset by his mastery. And we’ll still get our top 10 offense in to score goals (crosses fingers).