Donovan, Altidore, and Howard in cat fight for U.S. “Player of the Year” — USA Soccer Stud 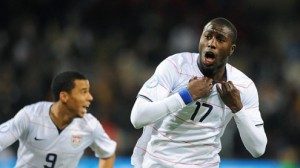 Facetious headline aside, the three are competing finalist for the 2009 Honda Player of the Year, which recognizes the most important player from the men’s national team. Donovan has won the award five times, including the last two years. Howard is a finalist for the third year in the row, and 19 year-old Altidore is a first-time finalist.

To recap their achievements, Donovan has contributed to 69% of all World Cup qualifying goals (either on his own or by way of assists). Tim Howard is a monster goal keeper, saving multiple wins throughout the year and winning a Golden Glove award for best goalkeeper at the Confederations Cup. And rising-star Jozy Altidore became the first U.S. player to record a hat trick during 3-0 win against Trinidad & Tobago in April, not to mention scoring eight goals in 19 appearances.

Who do you think should win?