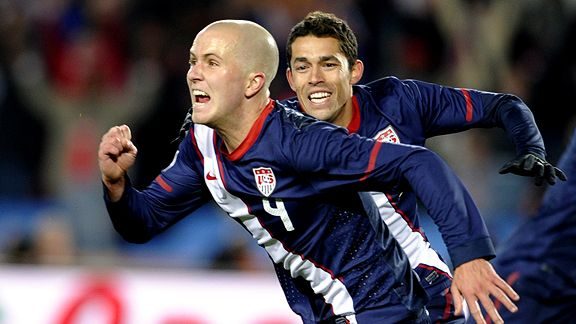 After conceding two goals with careless defense, the United States achieved an improbable draw against Slovenia today, thanks to second half goals by Landon Donovan and Michael Bradley. (Highlights here)

Unfortunately for the yanks, the go-ahead goal by Maurice Edu in the 85th minute was inexplicably reversed. “I’m a little gutted to be honest,” Donovan said after the game. “I don’t know how they stole that last goal from us. I’m not sure what the call was. He (the referee) wouldn’t tell us what the call was.”

Said coach Bob Bradley, “I still don’t know why the goal was disallowed.”

Referee Koman Couilibaly (of Mali) disallowed Edu’s goal for an off-ball foul that occurred just prior. The ref neither named the player that committed the foul, nor did he offer further explanation.

A disappointment to be sure, but the United States shouldn’t have been caught flat-footed on defense in the first-half to begin with. Clean that slop up and it could have been an authoritative win, instead of a controversial (but still grateful) tie.

“We know we’re good enough to play against a team like that,” Donovan concluded. “We can’t keep putting ourselves in holes like that. We’ve got one more chance against Algeria, and we’re still alive.”