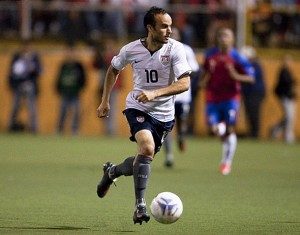 Thanks to incredible offense, star American forward Landon Donovan is the most talented U.S. soccer player of the decade. Or so say the judges of the Honda Player of the Year award. On Tuesday, organizers awarded Donovan with a record sixth award, making him the most successful player since first winning the honor in 2002. He followed in 2003 and 2004. Then in 2007,  2008, and this year.

“For U.S. Soccer, this has been a special year and I hope it’s a stepping stone to many, many great things to come next year,” Donovan said, before acknowledging the recovery efforts of teammate Charlie Davies, who broke several bones in a serious car accident last week.