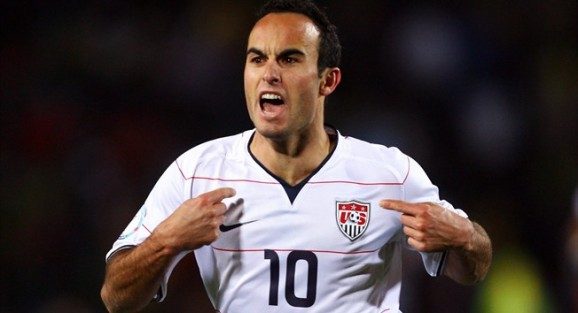 If there’s one thing team USA is short on when it comes to the World Cup, it’s dreaming big. Said star playmaker Landon Donovan this week in an interview with FIFA.com: “The expectations are simple: advance out of our group to the knockout rounds and go from there. We think that is a realistic goal.”

Now Donovan might be trying to be modest here, but I’m tired of hearing our team and its supporters calling the round of 16 an accomplishment. Our team has made it to the semis and quarterfinals before, most recently eight years ago. So why not expect more from them? Why not go into the tournament like all other major (or rising soccer) nations do: “We will be dissapointed if we don’t go all the way.”

I was disappointed in 2002 when Landon & Co. couldn’t eek past a victory over Germany (a team we outplayed) to make the semi-finals. A nice showing, yes. But I was disappointed. So too should our players. Otherwise, we’ll hurt our chances of winning by patting ourselves on the back for mediocre performances.

If Donovan really thinks “this team has the ability to do something special” at the World Cup, then say so. Don’t be coy. Yes, “The challenge will be to bring our best play to every game during the World Cup in South Africa,” if we are to stand a chance. But hope for that. Set your sights on that.