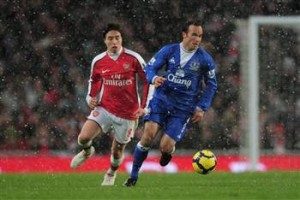 Star U.S. international Landon Donovan made an immediate impact Saturday during his English Premier League debut for Everton. On a 10 week loan from the LA Galaxy, the American forward started the game and delivered a first-rate corner kick in the 12th minute that connected with the noggin’ of Leon Osman to go up 1-nil. After rival Arsenal equalized four minutes later, Donovan nearly scored again in the second half, only to see his curling shot miss wide. The game ended in a 2-2 draw, but it was an impressive debut for the U.S. forward.