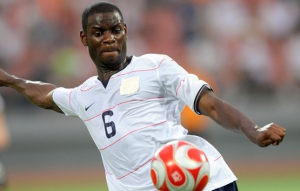 After scoring the winning goal for his Rangers side against Celtic this year, the form (and stock) of U.S. midfielder Maurice Edu is rising, says FIFA.

There might well be a place for Edu on the Stars and Stripes’ flight to South Africa, where he painfully missed out on those heady glories in 2009 [due to injury]. And with Clark – his replacement at that historic FIFA Confederations Cup – struggling mightily with injuries, poor form and low confidence after a move to Bundesliga outfit Frankfurt, the door may well be propped open for the opportunistic Edu.

Although Edu hasn’t played regularly for the U.S. team, he’s widely regarded as a starter by the media due to his innate talent.