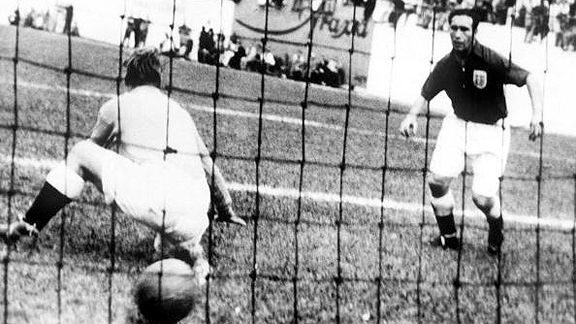 Bert Williams is 90. You don’t him by name, but he’s the English keeper who allowed a single goal in the team’s monumental loss to America at the 1950 World Cup.

In an interview with the Associated Press this week, he said he was “virtually one of the spectators,” since England dominated possession, but couldn’t “get the ball past” the American defense. “As soon as England played a good ball through, the whole American team retreated to the 18-yard line,” the keeper remembers. “We thought the score should have been 8-1, 10-1 even.”

But it wasn’t. The U.S. won 1-nil. Contrary to what ESPN reports, Williams said it was a freak goal that never should have been. “I had the ball covered and it was a deflection off one of their players who was standing in front of me,” he said. “I was going the right way. It just happened.”

What’s more, Williams said the Americans had “no intention of winning,” and even showed up to the game smoking cigars and wearing cowboy hats.

My response: We’ll take it. And have for the last 60 years.