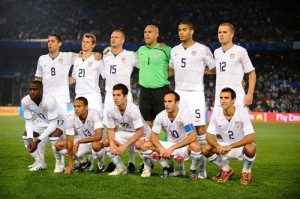 Here is my response to Paul Gardner’s column on defensive versus offensive soccer strategies:

First off, whoever coined the phrase “Defense wins championships” is a turd. Defense is important. Offensive is important. That’s it. To avoid losing, make sure both sides of play are well oiled.

Secondly, Brazil ’70 was a joy to watch. The greatest team ever. And much better than the sometimes mindless possession game of Spain ’10. (To get an idea, just watch Clodoaldo juke four defenders while barley touching the ball at 4:00 in the above video, not to mention the entire fluidity of the team.)

Thirdly, theatrics and blatant cheating aside (I hate both, but they are entertaining), Italy may very well be the most boring team to watch at the World Cup.

Their four world championships, however, are “proof that playing defensively is a successful strategy.” At least, it’s allowed them to overachieve.

How else could the team have only one fewer World Cup trophies than Brazil, considering how much more talented Brazilians innately are?

And I don’t think Italians overly devalue offense. Their objective is simple: Score a goal, then drop back and play suffocating defense.

So from the spectator perspective, attacking is a much better product. But from the coach’s perspective, defensive-minded play may be the more effective strategy, at least in terms of punching above your weight.