Got strikers: Who will join Altidore as forward at World Cup? — USA Soccer Stud 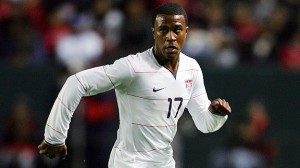 Due to a still recovering Charlie Davies, “It’s a dandy time to be a U.S. striker,” writes ESPN’s Steve Davis, “plump with opportunity for a bundle of fringe forwards.”

Assuming starter Davies won’t make a comeback in time, who will join Jozy Alitdore at forward, provided coach Bradley sticks with the tried and true 4-4-2 lineup? Both Donovan and Dempsey are expected to play opposite flanks in midfield. So who’s left at forward?

Primary candidates include “pacey” Robbie Findley, Jeff Cunningham, and Conor Casey, says Davis. And of course, the untested young guns that could breakthrough at the World Cup, like Donovan did in 2002. Yeah, let’s hope for that.