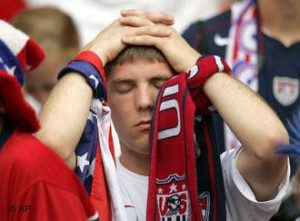 Since American viewers demand the best in sports, they watch international soccer games over Major League games by more than 2 to 1, argues Fox Sports columnist Jaime Trecker. As a result, this hurts our country’s future efforts to field a better national team, since all eyes are on foreign stars.

“European teams are blowing away their American competition by virtually every metric,” Trecker says. “At one time, soccer pundits could foist off the idea that American coaches and players were good guys who just couldn’t get breaks. We now see that these folks don’t get breaks because they are not good enough.”

Ouch. That being the case, “the fans are voting with their wallets and eyeballs, and homegrown soccer is falling behind,” he adds. If you’re an American athlete, why play soccer when there’s more fame, money, and respect by your peers in basketball, baseball, and football?