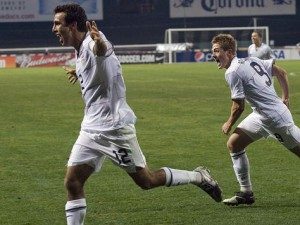 Bornstein celebrates after equalizing in final seconds of play

With fewer than 15 seconds remaining in the game, American defender Jonathan Bornstein scored a brilliant heading goal on Wednesday night to tie Costa Rica 2-2. In doing so, the American assured his team a first-place finish in World Cup group qualifying. With Costa Rica failing to win, it also meant that Honduras would clinch its first World Cup berth in 28 years.

President of the 7.5 million populated country, Roberto Michelleti, was quick to show his appreciation to the American after the game. “We are inviting [Bornstein] to Honduras for an all expense paid vacation to the Islas de la Bahia,” the president announced on national television, via a Honduran daily paper. “Thank you, Jonathan Bornstein,” read the headline.