In a battle of benches, USA loses 3-1 to Honduras — USA Soccer Stud 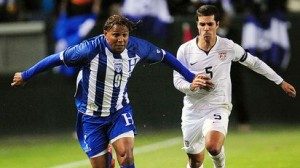 I can now confirm what we suspected before: the U.S. men’s national team has no depth whatsoever.

Playing almost all second-string players, the Yanks were slaughtered by Honduras on Saturday 3-1. That last point came late in the second half; yup, the U.S. defense allowed three unanswered goals. Granted, the team played a man down, after captain Jimmy Conrad was dismissed early with a second yellow card in the 17th minute. Still, the team on the field couldn’t have connected a pass even if they were playing with an oversized beach ball.

It’s obvious if the U.S. plans to attend latter rounds of the World Cup, it will need to rely on its starters. May the soccer Gods help us.