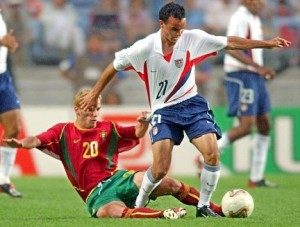 The United States may be one of the rising powers in soccer, according to Soccernomics, but the odds of winning the World Cup are no where near being in our favor.

As U.S. Soccer’s Brief History of the FIFA World Cup shows, the U.S. national team has only advanced past the first round in 2 out of 5 consecutive attempts over the last 20 years. Once in 1994 on home soil, and once in 2002 at the Korea/Japan games (pictured). In other words, we reach the sweet 16 only 40% of the time.

These are the 32 nations that qualified for the 2010 World Cup — USA Soccer Stud
Good luck watching the USA, Honduras qualifier next Saturday; game is closed circuit TV only — USA Soccer Stud