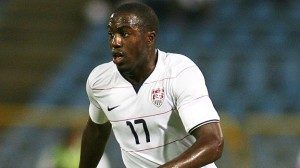 The U.S. national team has a problem. Specifically, they have a gap in the forward position, primarily due to Charlie Davies injury and subsequently due to lack of replacement talent.

That being the case, ESPN columnist Leander Schaerlaeckens thinks the U.S. should play a 4-5-1 formation at the World Cup, and not the popular but “impractical” 4-4-2 configuration. His argument: Unlike forwards, we have a “surplus” or reliable midfielders, so let’s play to that strength with a tough Jozy Altidore as the lone striker.

The U.S. has played a 4-5-1 at the World Cup before, most recently in 2006 and 1998. But they got knocked out in the first round of both those tournaments, and some blame the formation.

Still, this is a different team, and the idea is convincing enough for coach Bradley to at least consider it. But is it a better option than moving Dempsey to forward alongside Altidore and sticking with four midfielders? That’s something Bradley will hopefully compare in upcoming friendlies, but I’d say both of those options are better than settling for an inferior second-string striker like Ching or Casey.