In need of midfielders: A case for DaMarcus Beasley — USA Soccer Stud 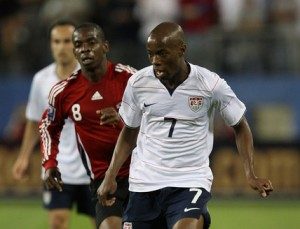 As a starter and asset to the beloved 2002 squad, DaMarcus Beasley hasn’t had much of an impact on American soccer since. Nevertheless, the seasoned player deserves a second chance, writes columnist Ives Galarcep, given Beasley’s recent improvements—not to mention holes in our midfield leading up to next summers World Cup.

“There has been plenty of venom sprayed at Beasley from U.S. fans who simply don’t feel he is worthy of consideration for the 2010 U.S. World Cup team, but those folks have some short memories, because Beasley remains a player who has been very important to the national team in recent years,” says Galarcep. “He was awful last summer, both in World Cup qualifying and the Confederations Cup, but he absolutely deserves another national team look.”

As Galarcep sees it, he may be the best option, given the absence of an injured Charlie Davies. “In case you haven’t noticed, there aren’t a ton of left wing options for the U.S. team. [Beasley] still has a long way to go, but his recent success should be seen as a position sign and a potential step toward a national team comeback.”