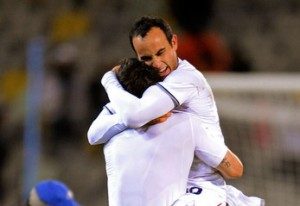 The United States national team dodged several bullets Friday in preparation for next year’s World Cup. As decided by FIFA’s lottery-style draw, the team will play England June 12 in its World Cup opener, the first matchup between the two since the Americans’ historic upset at the 1950 tournament. The U.S. will then play Slovenia on June 18 and Algeria on June 23 in the first round, in what is widely considered a relatively easy group.

Intercontinental rivals Mexico will face South Africa in the tournament opener on June 11. They’ll then play France and Uruguay. In terms of the venerable “group of death,” the most difficult group from which to advance to the sweet 16, Brazil was paired with high-ranking Portugal, red-hot Ivory Coast, and the fightin’ North Koreans. Group B is arguably the second most competitive group and includes Argentina, Greece, South Korea and Nigeria.

The full 32-team draw is as follows: