Jay DeMerit’s rags to riches soccer story is inspiring, but should he start the World Cup? — USA Soccer Stud 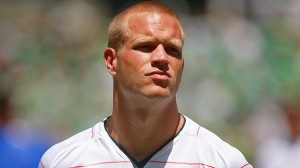 Jay DeMerit isn’t the most gifted defender on the U.S. national soccer team. But that hasn’t stopped him from becoming the hardest-working player on the team.

Nine years ago, DeMerit couldn’t buy a spot on a non-paying MLS reserve squad. Several savings accounts, tryouts, odd jobs, and moves to England later, and DeMerit would become captain of a second-division English team and U.S. international by 2007. It’s the kind of stuff sports movies are made of.

But while his Rudy-like story is inspiring, that doesn’t mean he’s worthy of a starting position on the team this summer at the World Cup alongside Gooch, Boca, and Spector.

Yes, DeMerit played admirably last summer at the Confederations Cup—for a team that got to the finals losing as many games as they they won. And his work ethic makes him a sure-fire substitute. But the ideal starting defender should be both hard-working and talented. Otherwise they’ll get outplayed by the likes of Rooney and Messi more often than not.

If said ideal doesn’t exist, then by all means give DeMerit the start. But if a better competitor does exists, he shouldn’t be overlooked for having a more boring story.