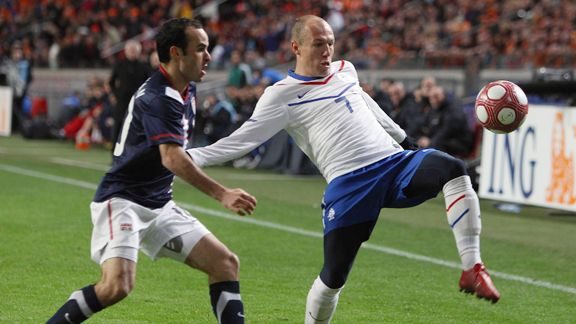 Although it could have been worse, U.S. fans had their World Cup aspirations dashed on Wednesday, as the Americans were dominated for most of their friendly against the third-ranked Netherlands. The yanks put up a fight in the final minutes of play, but early sloppiness, poor passing, and a disjointed defense were too much to overcome in the end.

The Netherlands took the lead on a penalty midway through the first half, after Jonathon Bornstein got beat in the box and then pulled a dutch striker to the ground. In the second half, Bornstein was also involved in a deflected shot that U.S. keeper Tim Howard was unable to maintain, which put the Netherlands up 2-nil.

In the 82nd minute, Howard kept things from turning ugly, with a brilliant diving save. After that, the U.S. finally looked like a cohesive team, stringing passes to each other and looking sharp in their new uniforms.

Their late effort was rewarded in the 89th minute, after Carlos Bocanegra scored an exciting header from a set pass by Damarcus Beasley. But despite several scoring opportunities in stoppage time, making for a nail biter, the Americans failed to equalize.

The match was a good showing for several U.S. players, including Jozy Altidore, Michael Bradely, Jonathon Spector (for the most part) and late substitute Clarence Goodson. But it also proved that Jay Demerit  and Jonathon Bornstein probably aren’t starter-worthy for the World Cup.

With few touches on ball, leading goal scorer Landon Donovan wasn’t a factor in the loss.