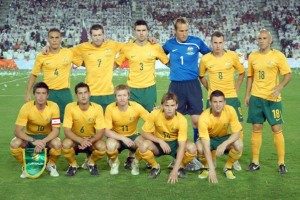 After star striker Didier Drogba broke his arm today in his team’s final World Cup warm-up game (against Japan), I wouldn’t be surprised if Saturday’s friendly between USA and Australia ended up being more of a run-around than intense (aka fun) game to watch. Nevertheless, here’s what fans can expect.

The U.S. may be better on paper, ranked 14th in the world compared to Australia’s 20th. But in two previous meetings, both taking place on U.S. soil in the ’90s, Australia has the head-to-head advantage, beating us 1-nothing in 1992, and tying us in a scoreless draw six years later.

The Socceroos also have the defensive edge, conceding just one goal in eight World Cup qualifying games (gulp). Granted, their Asia grouping is one of the weakest regions in the world, but Australia is tough.

On that note, so is our offense. And our starting 11 have more depth than theirs, so I give U.S. the slight advantage.