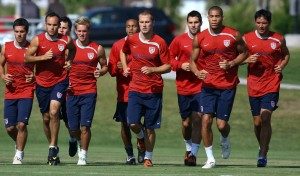 When fit, Oguchi Onyewu is the best central defender we have. By far.

Unfortunately for “Gooch,” he’s still recovering from knee injury, and it showed (badly I might add) as a second half sub in last week’s 3-1 win over Australia.

“I’m physically fit,” he told the Associated Press today, like he did a month ago. “I’m up to facing England.” But with the possibility of playing in the world’s largest sporting event, what do you expect him to say?

To be sure, there’s a conflict of interest here. Gooch wanting to play in World Cup is not the same as fielding the best American team. And although we feel for Onyewu, and regularly champion him, we need to make do with what we have right now until he’s 100%, which even his teammates admit he’s not.

Bradley, I’m not telling you how to do your job (okay, I am), but start these four on Saturday: Spector, Goodson, Boca, Cherundolo. They’re not perfect. But they are the least liable and most fit play-making defenders that we have.