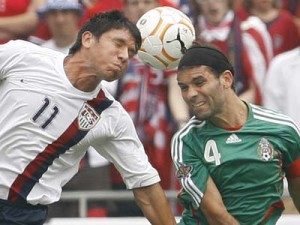 Wanna reach the second round of the World Cup? Then you need to win your first game, or it least tie, say the numbers.

As it pertains to us, “The United States was eliminated in the group stage all four times after losing its opener,” reports ESPN, as was the case in 2006.

In other words, we really need to beat or tie England in this summer’s opener, if we want to keep history from repeating. C’mon, Yanks!