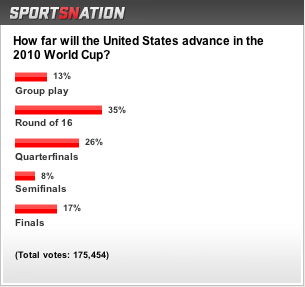 Can the United States win the World Cup this summer? No, say the majority of ESPN.com readers in an online poll, but they’ll finish better than they did in 2006.

As for truly optimistic pollsters, 8 percent think the team will repeat their 1950 semi-final finish, while 17% hope the team will go all the way.

In an effort to tame possible disappointment, USA Soccer Stud voted “quarterfinals,” but deep down is rooting for a final finish. After all, why play if you don’t think you can win?

Where do you think the U.S. will finish this summer?