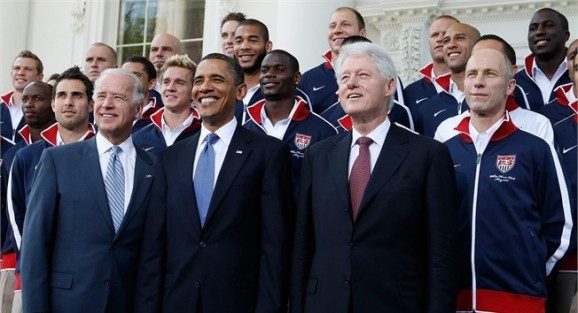 Press Release — The day after the historic and dramatic 1-0 victory against Algeria that sent the USA to the Round of 16 at the 2010 FIFA World Cup, United States President Barack Obama called the team and addressed the players and staff via speakerphone.

The call came after dinner tonight to the meal room at the team hotel. U.S. head coach Bob Bradley first thanked the President for taking the time to address the team.

The President then congratulated the players on the amazing team spirit they showed during the unbeaten run through the first round of the World Cup and told them that while he was meeting with General Petraeus in the Oval Office, he could hear the rest of the West Wing erupt when Landon Donovan scored the game-winner.

The President then congratulated Donovan on the game-winning goal, asked Tim Howard how his ribs were feeling and asked Clint Dempsey how his lip was doing. The President wished the team good luck on Saturday and made sure they knew that the entire country was cheering them on.

“It was certainly an honor to have President Obama take the time to speak to our team,” said Bradley. “We are immensely proud of the opportunity to represent the United States, and to have the President reinforce that feeling is something we greatly appreciate. The support we have received from the U.S. fans that have traveled to South Africa as well as everyone following back home has been very gratifying and is a source of inspiration for our players. That is something we will carry with us when we step on the field this weekend.”