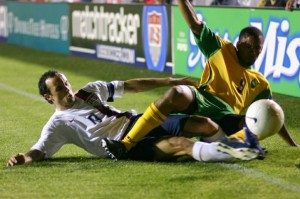 With less than three months to the start of the World Cup, the United States national team still has six prominent players recovering from injury. And while not all will recover in time, most will be able to play in South Africa, reports the well-informed folks at World Cup Blog.

But fitness is still an issue.

The player with the best chance for full recovery is probably one of the most missed in terms of offense. Midfielder Clint Dempsey, expected to play forward at the World Cup, returned to action for his club team (Fulham) this week, playing 72 minutes in a loss to Manchester United. That being the case, Dempsey should be more than match fit this June.

Having rejoined his club team AC Milan, defender Oguchi Onyewu is also expected to regain his fitness prior to the World Cup, and is sorely missed on our back line.

Three other players—midfielder Ricardo Clark, defender Benny Feilhaber, and midfielder Stuart Holden—are on track to recover in time, but their fitness levels are uncertain, given the tight turnaround of recovery.

The most seriously injured, forward Charlie Davies “continues to improve at a record pace,” reports the World Cup Blog, and is now listed “as a definite for making it to South Africa,” most likely as a reserve.

Although not ideal, other World Cup qualifying teams struggle with the same, if not more, injury than the U.S. squad, so I’d say things are lookin’ up.