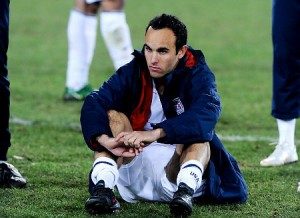 Team USA is screwed next year. Or so says Joe Guarr, the second columnist in as many weeks to criticize the men’s national squad for sub-par play against sub-par teams.

“If you bought stock in Team USA’s chances at the 2010 World Cup, it’s time to sell now before it plunges toward rock bottom,” writes Guarr, as USA participation in the tournament is all but guaranteed. The reason? None other than coach Bob Bradley, seen by some as detached and too conservative.

“While Bradley’s preferred style of play might be good enough to eke out victories in CONCACAF, the U.S. will be sent home early from South Africa unless they actively try to control the match,” finishes Guarr. “A defensive shell is not the answer, unless the goal is a second-consecutive first round exit.”