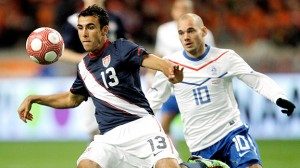 Nate Silver predicts the USA will advance to at least the second round of the World Cup this summer. You should care because Silver is the man that predicts presidential elections better than exit polls, baseball results better than experts, and was named a Time Magazine person of the year.

In other words, he knows his stuff.

What’s more, Silver says the team can advance even if it loses its opener against England, something an identical prediction by ESPN Magazine also believes.

“According to our simulations, the United States will still have a 42 percent chance of advancing even if it loses the opening match to England,” Silver writes. “On the other hand, its odds shoot up to 62 percent if it manages a draw and 87 percent if it gets a win. So the United States has plenty to play for — but it can afford to be loose and take chances.”

That last sentiment about being able to lose its opener against England contradicts previous statistics, however. According to recent World Cup history, only eight percent of teams that lose their opener advance to the second round.

In any case, Silver concludes, “In contrast to American squads from the recent past that were best known for their goalkeeping, this team is more offense-minded; its attack rates ninth in the world, according to SPI, but its defense just 34th. The United States should figure it needs two goals to defeat England, since a clean sheet is unlikely — and it’ll need to watch against conceding soft goals against Slovenia and Algeria.”