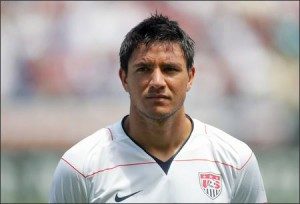 Maybe Brian Ching will fill our striker gap? Or so speculates the Men’s National Team blog:

Ten goals in 43 international appearances. Four goals in 10 matches of the 2010 World Cup qualifying cycle, good for third-most on the team. A career-high 11 appearances in 2009. Solid numbers for any player. Nonetheless, even Brian Ching admits that last year was not his best, and that he needs to work harder than ever to earn a spot on the roster for South Africa.  After one of the longest breaks from soccer in years, Ching seems physically and mentally prepared to do just that.

I’m still hoping that Bradley identifies and starts an unknown but dangerous youngling leading up to the cup. But I’ll take whoever can fill the void alongside Altidore.