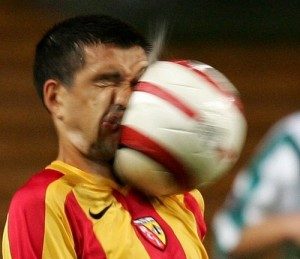 Part of an ongoing series where anything I don’t like is labeled “un-American.”

I’ve been an American soccer fan for a long-time, and I can’t stand it anymore. Words like “pace” and “result” should be barred from the game.

In case you’ve never seen a soccer match, many soccer fans and sports writers use the word “pace” when describing a fast player. For example, they’ll say So-And-So “has pace,” or “is pacey.”

Dumbest thing ever. For the record, my grandma “has pace.” It’s not a rapid pace, but she is able to move. And pace is defined as “any rate of movement.” When describing a fast player next time, just says he’s “fast.” Or “quick.” Either will suffice.

But that’s not the only dumb thing soccerphiles say. Often times you can hear coaches, players, and commentators spewing nonsensical rubbish like, “We need to get a result,” or “We got the result.” Like the errant use of pace to describe quickness, what these nimrods really mean is “let’s not lose.” Or better, “Let’s freakin’ win.”

To be clear, a “result” is “something that happens as a consequence.” An outcome. Simply electing to play will get you some kind of result. A loss is a result. A tie is a result. Even a canceled game could be the “result” of bad weather.

In an effort to sound intelligent, or presumably to distinguish themselves from other sports, soccer fans actually end up sounding ignorant at best, elitist at worst. Any commentator or fan caught perpetuating this nonsense should be kicked in the shins.

If Americans (and international fans by extension) want the game to grow in America, try speaking in terms the majority of people can understand.