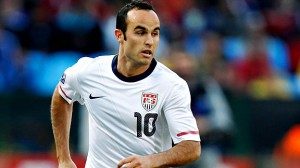 Landon Donovan is good, but he’s not as good as his jersey number suggests, says ESPN columnist David Hirshey.

“Currently, the best player that America has ever produced, Landon Donovan, wears No. 10 for club and country. But Lan the Man is more of a natural wide player whose speed and guile wreak havoc on the flanks rather than a consummate playmaker who brings a sense of calm and invention to the otherwise frenetic U.S. attack,” Hirshey argues. “In short, he doesn’t fit the expectations and requirements of the number.”

As Hirshey sees it, the U.S. will never truly compete for the World Cup until its officiating staff embraces the importance of a true no. 10 player. “In order to advance the quality of his team, Bob Bradley must start embracing the very type of player who he has traditionally shunned. In this, he shares a seat with England’s Fabio Capello, as both seem addicted to the notion that energy, drive and hustle — a team, in other words, of Dirk Kuyt clones — is sufficient to break the will of more talented opponents.

“As long as these myopic tendencies remain in place, neither of these squads has the slightest chance of unseating the Spains, Hollands, Brazils, Argentinas or probably even the Mexicos of the soccer world.”

The only problem is finding a true no. 10 is a really hard thing to do. But with a population of over 300 million, there’s gotta be someone in there.