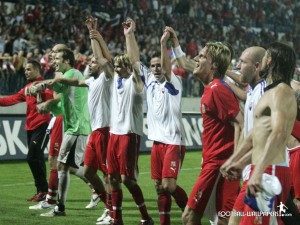 After being criticized for the way they meagerly qualified for the World Cup, the United States National Team won’t be short on practice games leading up to next year’s big event. USA will face fellow 2010 FIFA World Cup qualifiers Slovakia on Saturday, Nov.14 in Bratislava, the U.S. Soccer Federation announced today. Four days later, the U.S. will play at Denmark, as previously reported.

“We are very pleased about the opportunity to face another quality opponent on European soil,” said U.S. coach Bob Bradley. “Slovakia finished on top of a very competitive group in UEFA qualifying. With so few available dates for international matches between now and the World Cup, having the chance to play two fellow World Cup finalists is a big plus in terms of our preparations.”

Although unconfirmed, the L.A. Times reported last month that Team USA will also play Holland on Mar. 3, making it the third warm up game on foreign soil. Whatever it takes to get our club in shape.