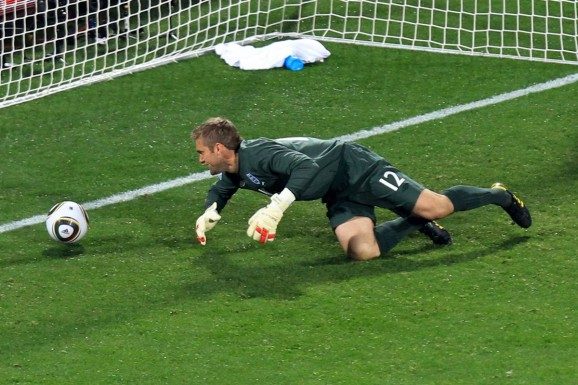 The United States didn’t deserve to tie England 1-1 today in their opening game of the World Cup (highlights here). But they did, thanks to two goalies: English keeper Robert Green for giving us one (pictured). And American keeper Tim Howard (the man of the match) for saving a half dozen others.

“The record will show it was a tie, but it was hardly that,” wrote the Associated Press. Indeed, out defense looked porous in the first half, and our midfield couldn’t connect a pass to save its life in the second. In addition to Howard, only Landon Donovan, Jozy Altidore, and Steve Cherundolo looked particularly strong.

If the United States plan on beating Slovenia next week, they had better look a lot more uniform than they did today.