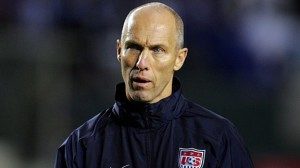 In context, the coach’s salary is a far cry from other national team henchmen. England’s Fabio Capello makes an average of $9 million plus per year. Regular gun-for-hire Dutchman Guus Hiddink makes $7.3 million, most recently with Russia. While Marcelo Lippi, Italy’s head coach, makes just under $4 million.

If Bradley’s salary isn’t indicative of how unpopular soccer remains in America, especially for a country with the highest per capita income in the world, I don’t know what is.