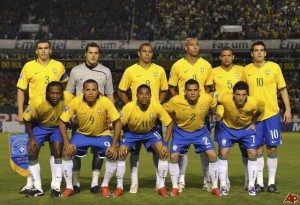 Press release: The U.S. Men’s National Team will play host to a truly special match when five-time World Cup champions Brazil comes to New Jersey on Tuesday, Aug. 10. for the first meeting between the two nations at the New Meadowlands Stadium in East Rutherford. Kickoff is set for 8 p.m. ET, and the match will be broadcast live on ESPN2.

“It is always an exciting opportunity when you have the chance to play one of the best teams in the world,” said U.S. head coach Bob Bradley. “We are constantly seeking ways to challenge our team and continue to raise the bar, and these types of matches are an important part of that process. The New York metropolitan area is home to some of the best soccer fans in the country, and we expect it will be a tremendous crowd at the New Meadowlands Stadium.”

The match will be played with stars from both teams less than one month after the conclusion of the 2010 FIFA World Cup in South Africa. A sellout crowd is expected for Brazil’s first appearance in the New York area in 14 years. The teams last met in the final of the 2009 FIFA Confederations Cup, where the U.S. jumped out to a 2-0 lead on goals by Clint Dempsey and Landon Donovan before Brazil rallied for a 3-2 victory.

The U.S. will play their final home match before departing for South Africa when they face Turkey on May 29 at Lincoln Financial Field in Philadelphia (tickets), where more than 50,000 tickets have already been sold. ESPN2 and Galavision will broadcast the match live beginning at 2 p.m. ET. ESPN will have a 30-minute pregame show beginning at 1:30 p.m. ET. The United States will play one final friendly before the tournament begins, this time on South African soil when they face Australia on June 5 at Ruimsig Stadium in Roodepoort. Kickoff is set for 2:30 p.m. local time (8:30 a.m. ET), and the match will be broadcast live on ESPN2.

Scheduled to open in 2010 the New Meadowlands Stadium is one of the 18 stadiums that is part of the bid to bring the FIFA World Cup to the United States in 2018 or 2022.

The U.S. Men’s National Team has been drawn into Group C with England, Slovenia and Algeria for the 2010 FIFA World Cup in South Africa. The U.S. will open its sixth consecutive World Cup finals tournament against England on June 12 in Rustenburg, and will follow that game with matches against Slovenia on June 18 in Johannesburg and Algeria on June 23 in Tshwane/Pretoria.