U.S. Soccer: “You need a lot of things to win a World Cup” — USA Soccer Stud 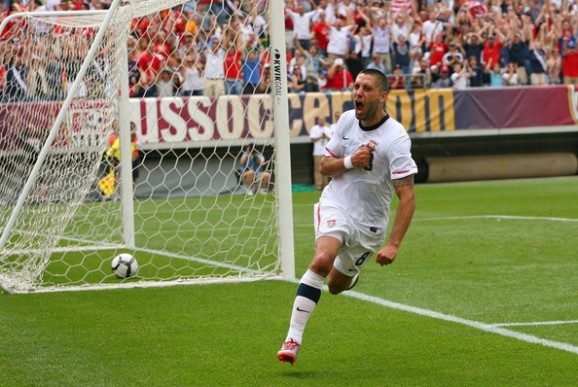 We interviewed Neil Buethe of U.S. Soccer this week, for his thoughts on this year’s World Cup campaign. Although the PR director remained more diplomatic in his comments than we’d like, he did address what the federation will consider a success this summer, what it takes to win the Cup, and where US Soccer hopes to be in the next 25 years, post South Africa. On with the interview…

Soccer Stud: Compared to previous World Cup campaigns, what did the federation focus on this cycle to ensure team success in South Africa?

Buethe: For every World Cup campaign the Federation does everything it can to provide the coaches and players with the best opportunity to succeed. It’s really difficult to compare the qualifying cycles because each one is unique and there are different situations that you need to deal with, not to mention different players and a different coaching staff. Saying that, this is the sixth straight World Cup the team will be participating in so there are definitely lessons we’ve learned and tips we’ve picked up along the way that we feel can help us now and in the future. We feel confident we’ve done as much as possible to put the team in a position to succeed this year.

Up to this point, what player development programs is US Soccer most proud of? What new programs are you planning (if any)?

We are always concentrating heavily on player development as we feel it’s one of – if not the – most important areas we need to improve as we move forward. It’s an ongoing process, one that we are always discussing, researching, studying and executing when we feel there’s a concept that can be successful in improving player development. The Development Academy is a good example of a program we’ve implemented that we believe will be a success, but we also know it’s not perfect so we’ll always trying to figure out how to make it better. Also, player development is a marathon, not a 100 meter sprint. We understand that and are concentrating on the long haul.

Although they start in soccer, many athletic hopefuls switch to other sports that offer more economic and fame incentives than soccer currently can in this country. From a recruiting and/or retention standpoint, what can the federation do to mitigate this occurrence? Might print advertisements that champion things like fewer injuries, less competition to turn pro, and greater opportunity to play abroad work when compared to other domestic sports?

As the game continues to grow in the United States and the development of players improves, there will be more opportunity for youth players to play professionally, whether that’s here in Major League Soccer on abroad. We don’t believe there’s on thing we can do that will move more kids into choosing soccer as the sport they will continue with as they get older, but we do believe over time we can provide a better environment for some of the best athletes to succeed in soccer and make it to the highest level.

Switching gears, how will US Soccer measure success at this summer’s World Cup?

We’ve always stated that our goal is to get out of our group and then go from there. Anything can happen in the single-elimination rounds. There are only a few teams that can legitimately state their goal is to win the World Cup and anything else is a disappointment. We’re probably not there yet, but that also doesn’t mean we aren’t doing everything we can to give us the best opportunity to make a run to the final. We showed last year in the Confederations Cup that anything is possible, and the players and coaches are definitely taking that mindset into the World Cup.

In October, US Soccer president Sunil Gulati told the New York Times, “Why play unless you believe you can win?” I love that attitude. And yet it seems like many soccer enthusiasts in the country, even sportswriters, measure national team success as solely getting out of the group, as opposed to winning it all. That said, should we demand more from our national team at the World Cup and expect them to make the final every four years? Would this expectation accelerate our first World Cup victory?

Expecting any national team – even one as successful as Brazil – to get to the World Cup final is a tall order, probably one that in the end isn’t 100 percent fair. You need a lot of things to win a World Cup, let alone make it to the final. Having a talented team only gets you so far at this level as this is the highest level. You need a bit of luck, and injuries can always play a factor as well.

The World Cup definitely brings more eyes to the game here in the United States, which is a great thing for the sport and can help it grow. There probably isn’t one tipping point, but a collection of many – some of which we’ve seen already – that will eventually contribute to soccer having more of an impact in the United States. We’ve seen the game grow immensely in the past 20 to 25 years and the goal is to continue to build on that growth for the next 25 years. If we are able to do that we are confident the sport can gain wider appeal and interest in the country.