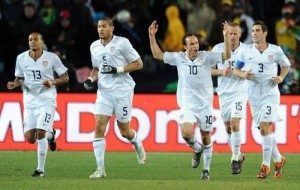 Is the U.S. the fourteenth best national team in the world? According to FIFA they are.

Starting 2010 where they finished last year at 14th, USA was the highest ranked team north of South America, beating Mexico at the 17th spot. Dubious or not, it’s something to feel good about.

In terms of the USA’s World Cup opponents, England was ranked 9th, Algeria 31st, and Slovenia 33rd. In preparation for games, the yanks will play the 71st ranked El Salvador on Feb. 24 and the 3rd ranked Netherlands on Mar. 3.

Spain took no. 1, followed closely by Brazil in second. Egypt was the biggest mover of the lot, jumping fourteen places to the 10th spot.