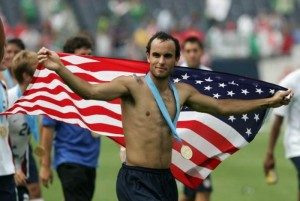 Most American athletes choose football, basketball, baseball, and hockey over soccer. It’s just the way it is. But surely a few Americans might be named as one of ESPN’s best 50 players of the 2010 World Cup.

“Donovan is comfortably the best player ever produced by the United States,” writes the sports conglomerate, “But has yet to elevate the U.S. national team to the next level.” They describe him as a “pacy, creative player who flourishes in space,” adding, “he uses the ball intelligently and excels on the counter attack,” while he “lacks the one-on-one moves to beat a defender consistently.”

Although I believe Donovan’s inclusion is warranted, I’m not sure if ESPN solely included him to throw U.S. fans a bone. Star keeper Tim Howard is probably deserving to be on the list as well.