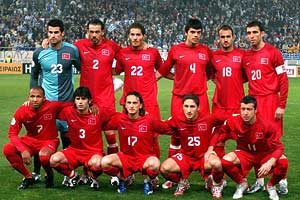 Add another to the list. The United States will play its final exhibition before the World Cup on May 29 against Turkey, reports the Associated Press. The game will be played at Philadelphia’s Lincoln Financial Field.

Turkey, who failed to qualify for this year’s tournament behind Spain and Bosnia, beat the Yanks 2-1 in 2003, and tied ‘em at home in 2001. They’re always a tough team, so it should be a fun match, not to mention extra practice before the big show.