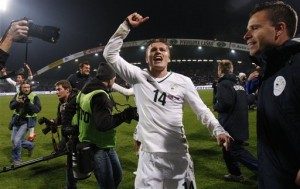 Six days after facing England in their World Cup opener, the U.S. will face the tiny country of Slovenia. Not a problem, right?

After reading their scouting report in ESPN’s World Cup Guide, I fear this little guy’s upset potential. With a penchant for slaying giants, they’re nicknamed the freakin’ Dragons, of all things.

“The Dragons emerged from their group just behind Slovakia—ahead of traditional regional powers the Czechs and Pols—by allowing just four goals in 10 qualifying matches,” the guide notes. “Forced into a home-and-home playoff against Russia, they snatched a goal late in a 2-1 loss in Moscow, then rattled the Russians in a 1-0 home victory to earn a South Africa trip on away gaols.”

But wait, there’s more! “Their combination of physical and mental toughness, the lack of marquee players and a slug-it-out, slot-it-down style make the Dragons a team opposing coaches hate to face. Manager Matjaz Kek has far exceeded home fans’ wildest dreams just by qualifying. Now Slovenia has the potential to ruin the English-speaking world’s Cup.”

Ay, ay, ay. I fear this group opponent more than anyone, actually. Tell me I’m wrong.