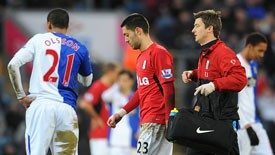 The United States national team took another hit on Sunday, after American international Clint Dempsey sustained a knee injury while playing for his club team (Fulham) in the English Premier League.

“The initial prognosis for Clint is not good,” said Fulham Manager Roy Hodgson. “We feel it might be a posterior cruciate knee ligament, which would be very bad for us and he would be out for a while.”

It would also be bad for America’s World Cup hopes. Expected to start on the front line, Dempsey is the latest in a recent string of serious injuries to the team. In October, central defender Oguchi Onyewu injured his knee and quick-foot striker Charlie Davies broke his leg in a fatal car crash. Onyewu is expected to return just in time for the Cup with limited practice time. Davies will likely miss the World Cup.

A proper diagnosis for Dempsey is expected on Tuesday.